The Tour of Břevnov monastery

Guided Tour: Church, Crypt, Old Abbot’s Residence and Garden Pavilion Vojtěška.
Visit in Czech language with information text about the monastery in English
or visit for preannounced groups with their own guide.

Notice:
Dogs and other animals are not allowed in the interiors of the sightseeing circuit – including animals in crates and luggage.
The tour of the brewery is not part of the monastery tour route. Brewery tours are organized and conducted by the brewery staff (contact here). 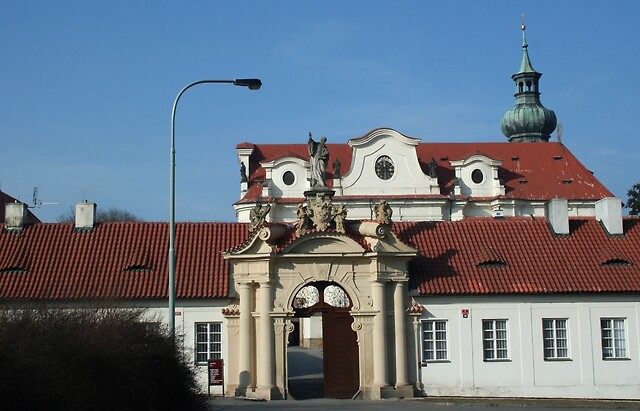 After we enter the monastery premises through a gate with a statue of St Benedict, on our way to St Margaret’s church we can see
– a granary, now an information desk and a beer shop, on the left,
– former agricultural houses and stables, today Klášterní šenk Restaurant, on the right. 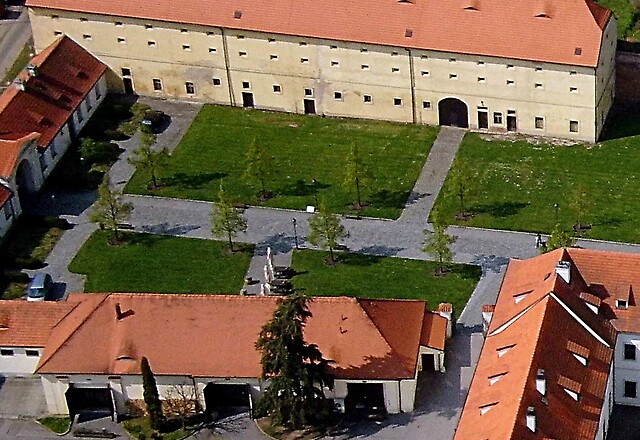 Opposite the church there is the so-called Sartorius’ Convent, now the Adalbert Hotel. 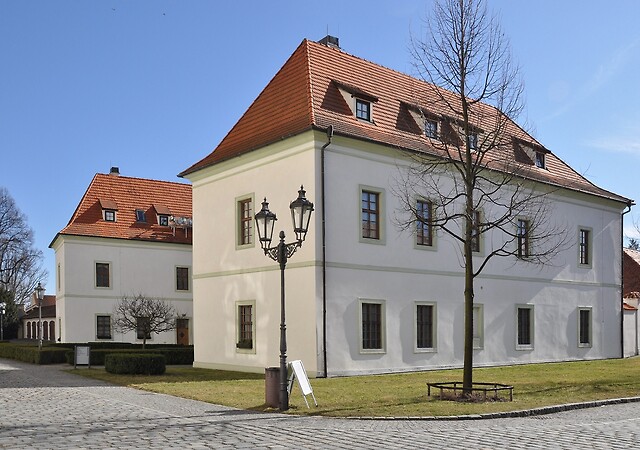 The Baroque church of St Margaret

Patron saints of Břevnov monastery and its church
Originally the monastery church was dedicated to St Benedict (993), the patron saint mentioned above. St Alexius of Edessa and St Boniface of Tarsus were the copatrons, most probably to remember the stay of the monastery founder, St Adalbert (Vojtěch), in the Santi Bonifacio ed Alessio monastery on the Aventine Hill in Rome. Since 1045, Bishop St Adalbert (Vojtěch), the cofounder of the monastery, has been venerated as the church’s patron saint, too. At the turn of the 15th and 16th centuries, the dedication of the church to St Benedict, St Alexius, St Boniface and St Adalbert (Vojtěch) sank into oblivion little by little and St Margaret, became very popular as the patroness saint of the church, mainly due to pilgrimages. As it is written in Legenda Aurea, St Margaret refused to marry the prefect of Antioch and confessed to be a Christian. She was tortured and imprisoned. In the prison a dragon appeared threatening to kill her but she killed it instead by blessing it with a cross. Shortly after she was beheaded (c. the 2nd half of the 3rd century). The relics of St Margaret were given to Břevnov monastery in 1262. Today they are kept in the altar of Virgin Mary in the southern part of the church’s chancel. 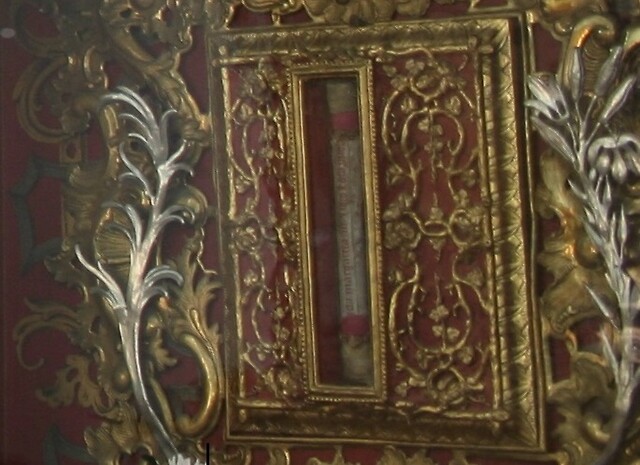 Cornices of both the main gables are decorated with two couples of statues, St Adalbert (Vojtěch) with Duke Boleslav II, and St Othmar with St Benedict. On the top of the roof above the chancel there is a golden “Cross of our holy father Benedict”. Four letters placed in the middle of the cross mean C(rux) S(ancti) P(atris) B(enedicti), i.e. the Cross of St Father Benedict. The letters on the horizontal beam of the cross say C(rux) S(ancta) S(it) M(ihi) L(ux) (May the holy cross be my light) and the letters on the vertical beam say N(on) D(raco) S(it) M(ihi) D(ux) (May the dragon never be my guide). Letters around the cross stand for the words V(ade) R(etro) S(atana) N(umquam) S(uade) M(ihi) V(ana) S(unt) M(ala) Q(uae) L(ibas) I(pse) V(enena) B(ibas), meaning: “Begone Satan! Never tempt me with your vanities! What you offer me is evil. Drink the poison yourself!” Above the southern door (outside) which is used as an entrance today, there is a memorial panel put there by Abbot Othmar Zinke in 1715 to commemorate the completion of the church’s basic structure. 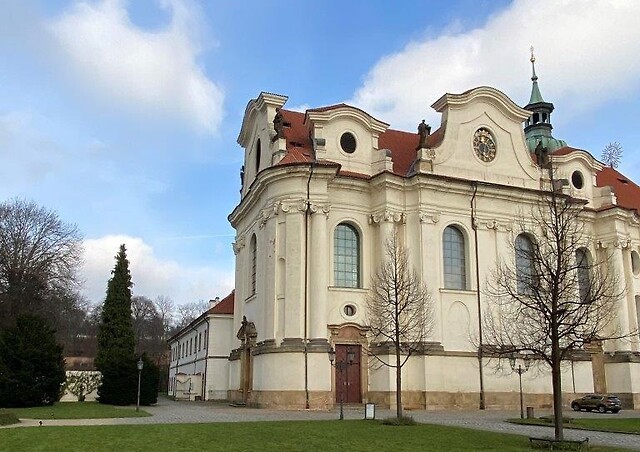 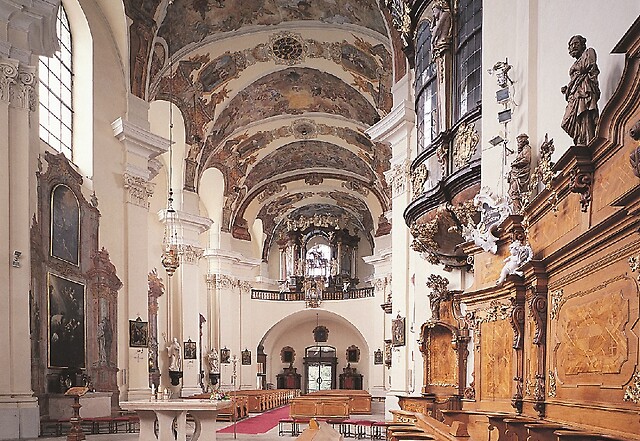 The main altar was designed by Kilián Ignác Dientzenhofer. In its niche, there is a statue of St. Margaret. Above St Margaret, the statue of God the Father blesses the saint, accompanied by the Holy Spirit above (in the form of a dove). 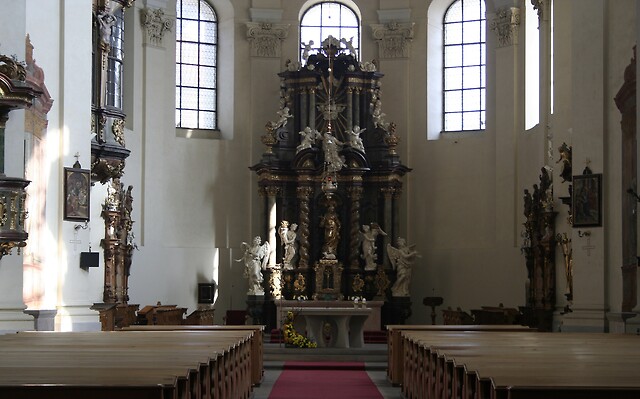 The church nave dominated by six side altars with paintings by Petr Brandl and statues by Matěj Václav Jäckel. 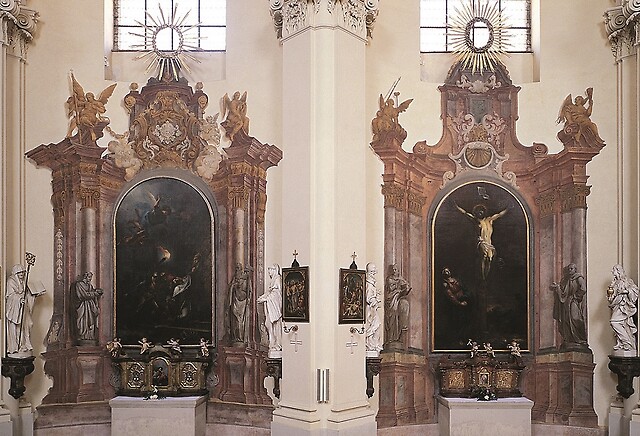 The vault of the church decorated with ceiling frescoes by Jakub Jan Steinfels. 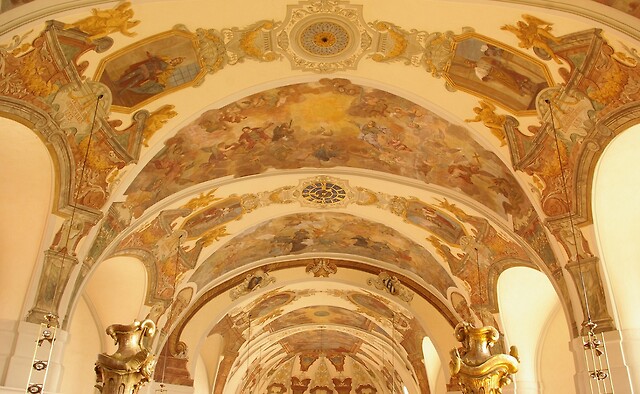 The organ case was designed by K. I. Dientzenhofer and made by the cabinet-maker Tobias Meysner of Grossdorf near Broumov. M. V. Jäckel is the author of the statues of angels. In the period between 2004 and 2007 the organ was reconstructed. 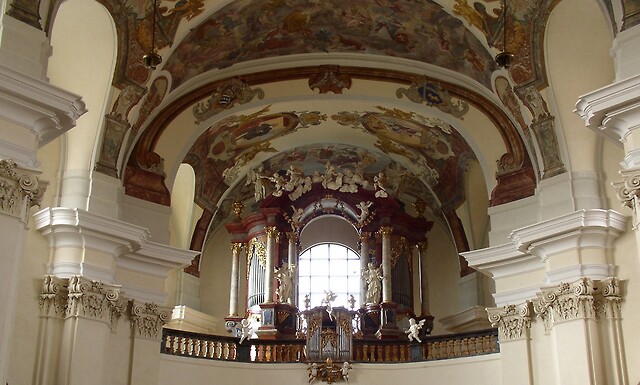 Under its Baroque buildings, the remains of older structures have been found. In 1964 and 1965 the archelogist Vladimír Píša conducted the archelogical research and made several important discoveries: the base of Romanesque and Gothic well, right in the place marked on a Baroque map, the graves under the sacristy and especially the walls of the Romanesque crypt – a part of the former liturgical area under the chancel of today’s church. On the basis of the research results it is possible to sum up the history of the crypt as follows, although we must always keep in mind that many hypotheses remain. The first community which was brought by Bishop Adalabert (Vojtěch) to Břevnov from Aventine, Rome lived in temporal wooden buildings. These had been replaced by stone buildings by the end of the abbacy of Meginhard (1035–1089). A three-nave Romanesque church was built – with a crypt in the east, a chancel above the crypt and the main nave adhering to it in the west (with a narthex and most probably two towers). Next to the chancel under which the crypt was built there had probably been two smaller apses, closing two aisles of the church. The crypt was built of small blocks of local marlstone. It was composed as a threenave hall, with an apse in the east. 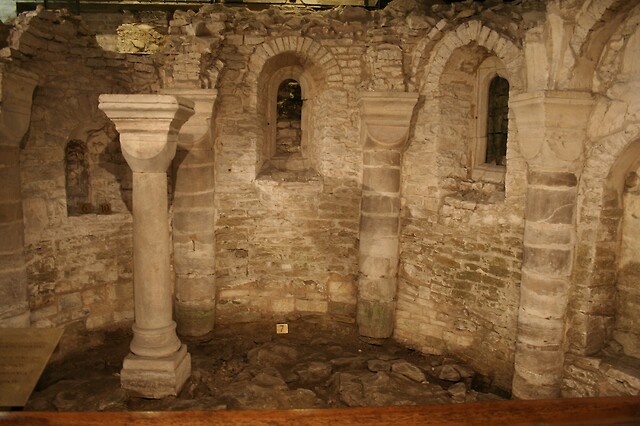 Prelate’s residence (the representative residence of the abbot)

is another part of the monastery open to public. It is possible to visit it either on various cultural and social occasions or on guided tours. However, not all the residence can be visited – it is not possible to tour over the ground floor where there are adminstration offices. The first floor can be toured over with a guide only.
The prelate’s residence was built by Kryštof a Kilián Ignác Dientzenhofer between 1709 and 1721. 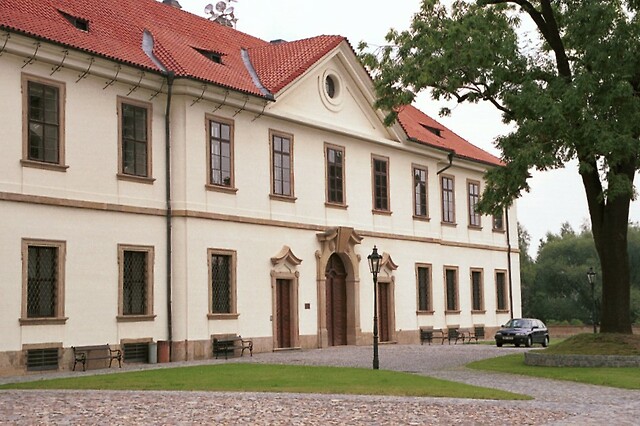 Maria Theresa Hall or Asam Hall is the most beautiful and admired chamber of the prelate’s residence. Maria Theresa Hall obtained its name in 1743, in commemoration of the coronation of Maria Theresa, a remarkable ruler of the Habsburgh dynasty, as Bohemian Queen and acknowledging the monastery’s privileges on this occasion. The frontal walls present two monumental paintings of the Empress and her son Joseph II, an emperor-to-be, on one side and her husband Francis of Lorraine (by Gottfried Auerbach of Wien, d. 1735) on the other side. Above the paintings there are the coats-of-arms of the rulers. Portraits of other Habsburg emperors are placed above the four doors leading to the hall: Ferdinand III, Leopold I, Joseph I and Charles VI. 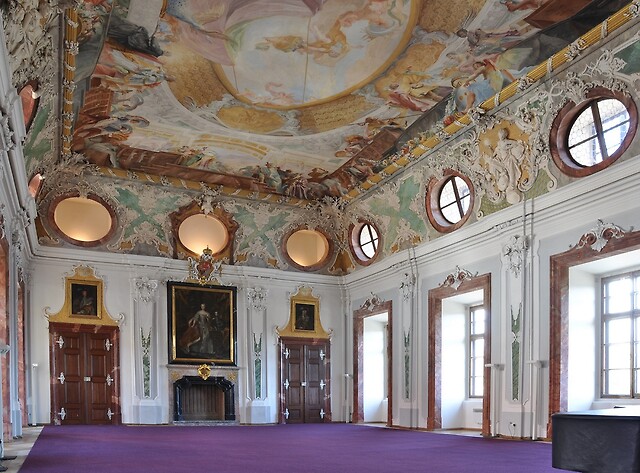 The whole of the ceiling is covered with a huge fresco by a famous Bavarian painter Cosmas Damian Asam called “The Miracle of Gunther (Vintíř) the hermit, at the court of Hungarian King Stephen”. (The alternative name of the hall is Asam Hall, reminding us of the author of the fresco.) While visiting Hungary, Gunther (Vintíř) had been invited for a feast by his relative, Hungarian King St Stephen and his wife Bl Gisela. It was the time of Lent. Gunther the hermit did not want to break fasting by eating meat. Therefore he started to pray – he did not want to offend the King and Queen as well – and the roasted peacock came back to life and flew away. 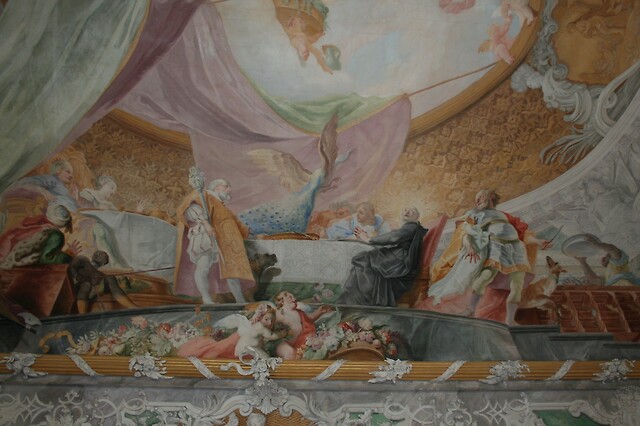 Pavilion Vojtěška and the monastery garden

If you follow the western front of the church and go along the convent, you will reach a spring called Vojtěška where according to the foundation legend St Adalbert (Vojtěch) and Duke Boleslav II met. The foundation legend and its imagination are rather enchanting. Duke Boleslav II and Bishop Adalbert dreamed the same dream in which God asked them to found a Benedictine monastery at the spring of Brusnice creek, not far from Prague. Both followed the instruction and met one another in the place shown to them in the dream. At the spring they saw a stag longing for water. Unfortunately, in the spring there was a log which prevented the stag from drinking. St. Adalbert pulled the log out, water spouted out and the stag could quench his thirst. The log – or rather a piece of a tree trunk with branch stubs – became a part of the monastery coat-of-arms. The pavilion above the spring was most probably built during the abbacy of Bavor of Nečtiny. Between 1724 and 1726 Kilián Ignác Dientzenhofer built a two-storey pavilion over the older, medieval one. 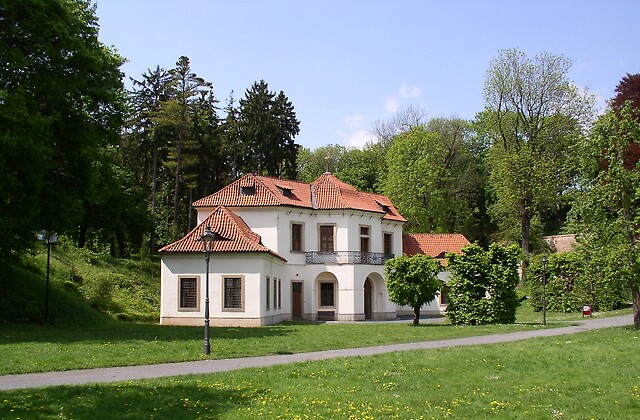 Kilián Ignác Dientzenhofer designed the terraced gardens of the monastery as well. He started in 1718, its final modifications took place between 1737 and 1738. The gardens have been preserved, with minor modifications, till the end of the World War II. Unfortunately, after the Benedictines had been expelled from Břevnov in 1950, the gardens and buildings in them were damaged. When the Benedictines returned to their monastery, with the financial support by the state as well as monasteries from abroad, it was possible to repair not only the church and convent with the prelate’s residence but also the Vojtěška pavilion (now serving as a parish centre), water supply adits and the chapel of St Lazarus in the cemetery. 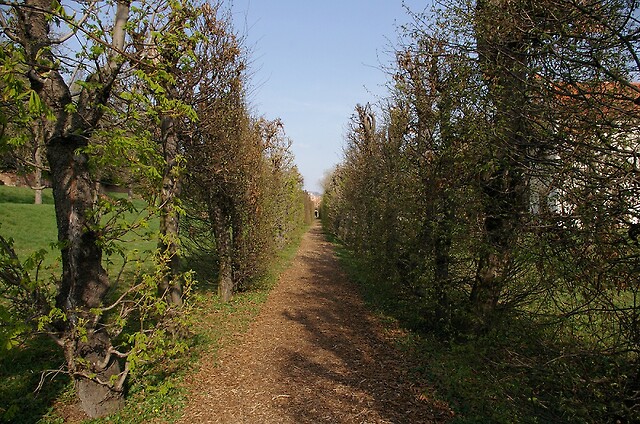 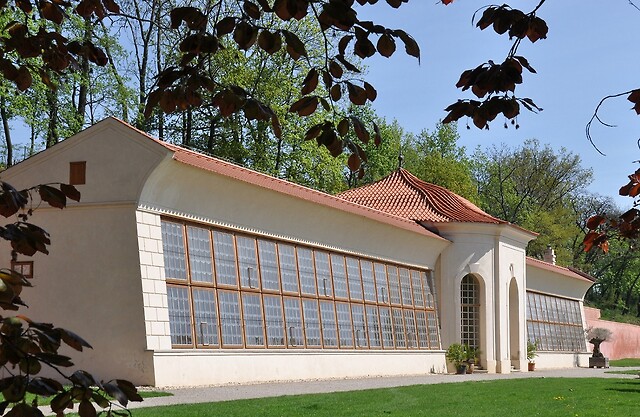